When I previously mentioned that my plans in Paris were to have no plans, I wasn’t kidding. Looking back at all we did while in this beautiful city proves that. I am a planner by nature. I love the actual exercise of planning things out – whether that be a vacation, a dinner party, weekly meal prep, a weekend spent cleaning. I will make a plan (and a list, of course!) and go at it.

But for this trip, I just really didn’t feel the need (or the want) to do that. So our days in Paris with “no plans” looked something like this:

Basking in the sun, eating leftover jambon et beurre sandwiches from the day before, journaling, and observing our fellow Parisians act out the joie de vivre (we were living in an apartment in Paris so we naturally considered ourselves Parisians for six days). Sounds pretty perfect because it was.

What we missed out on during this excursion: floating our own toy sailboat around the large pond, and going on a run along the paths criss-crossing these beautiful gardens. Although it’s probably a good thing we didn’t bring along our running shoes because we later learned there are numerous rules for runners here and we probably would have succeeded in breaking every single one of them. Disaster avoided by our vacation mode (aka lets-bring-workout-clothes-with-us-on-vacation-so-we-can-run-every-day-but-never-actually-unpack-said-clothes mode).

Do an online search for “famous Paris cafes” and the top two results will be Les Deux Magots and Café de Flore. These neighboring cafes opened their doors in the late 1800’s and were frequented by many literary and artistic famous (or not yet famous) throughout the early to mid 1900’s: Pablo Picasso, Ernest Hemingway, James Joyce, just to name a few. They are now popular tourist destinations due to their long history and their past patrons.

We strolled to this part of the city one day and decided to grab an outdoor table at Les Deux Magots. What a lovely lunch we had! It was quite a warm day so we both wanted something light and refreshing. The salads we ordered did not disappoint! They were both huge, filling and delicious! 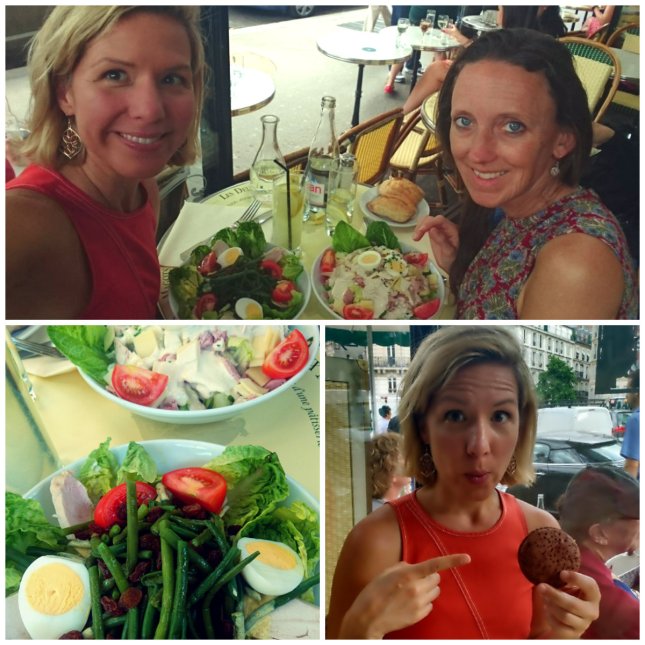 The large chocolate macaron we ordered off the dessert tray was delicious as well, but it’s 14€ price tag took some of the sweetness away (we didn’t know how much it was until we received our bill 😛 ).

Paris, and all of Europe, has some incredible, architecturally brilliant and beautiful sights. The Parisian “look” in particular is something so iconic and something I absolutely love. We strolled all over this city and saw so many famous and not-so-famous buildings, monuments, bridges and parks. 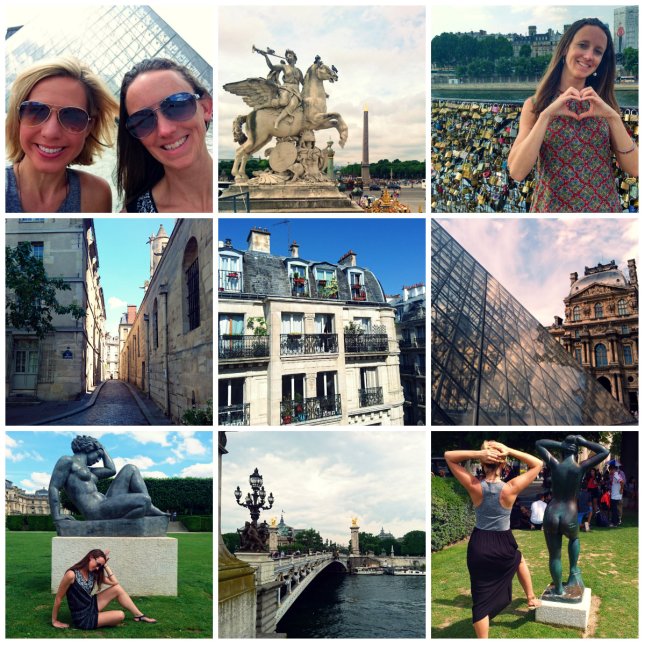 I’m very sorry to say those bottom two photos are the only statue mimicking ones we took in Paris. We were seriously off our game this trip. 😦

The Eiffel Tower. I’m pretty sure this is one of, if not the, most recognizable monuments in the world. And for very good reason. I don’t think you can comprehend just how large this tower is until you’re standing underneath it. Or viewing it from afar as it literally towers over and dwarfs everything surrounding it.

We visited la tour Eiffel twice during our visit: once during the day and once at night. Both were lovely (although we were freezing during our evening trip there).

The apartment we stayed in was in the Montmartre area of Paris so we were close to the Sacré-Cœur Basilica. We visited this church a few times during our stay and it’s magnificent. We had planned on climbing to the top of the basilica one morning to watch the sun rising over the city, but after waking up at the crack of dawn and making the hike up to the church, we were informed that the dome didn’t open until 9:00. Sad face. We still had a nice view of Paris from this vantage point and it was so, so nice walking through this busy city in the quiet, peaceful, early morning.

The heart of Paris: the Seine. The river that cuts the city in half and surrounds two islands: Île de la Cité and Île Saint-Louis. The bigger of the two islands, Île de la Cité’s claims to fame are the Notre-Dame Cathedral, Saint-Chappelle, the Palais de Justice and the Conciergerie. Île Saint-Louis’s claim to fame is Berthillon ice cream! I love them both. 🙂

France is a food lover’s dream come true. And I think 85% of my diet during my nearly three weeks in France was made up of some form of bread. I just can’t say no. Not in France. We had some amazing food while in Paris and I even cooked dinner one night in our apartment (bucket list item checked off – cooking a meal in Paris). While in France I threw caution out the window and just went for it. All of it. Give me all the food. So, so, so good.

Paris has my heart and it always will. These few days I spent there just whetted my appetite for more and I already can’t wait to return.