My final days in London were packed full of fun! On Sunday, Teresa and I attended a service at Balham Baptist Church and had “Sunday Roast” with the pastor, Steve Rouse, and his family at their home. We were put in contact with them through some mutual friends and they were so incredibly welcoming to us! We spent the entire afternoon with them, and then were driven back into the city by the whole family.

The following day started early with a trip to St. Paul’s Cathedral. We arrived as it opened and pretty much had the place to ourselves. This was only the second cathedral I had ever been in and it was truly indescribable. Photographs were not allowed inside but they really wouldn’t have been able to capture the magnificence of it. 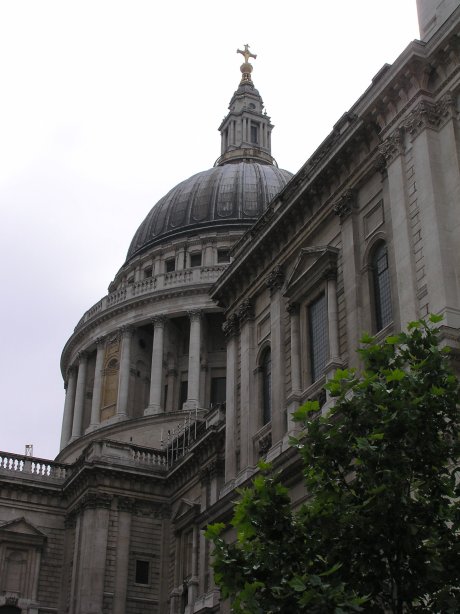 We wandered around the main cathedral for a while, went down into the crypt where so many people have been laid to rest, then started our workout for the day with a climb to the top of the dome.

Our climb started by taking 163 steps to the Whispering Gallery, then 119 steps to the Stone Gallery, and finally, 152 steps to the Golden Gallery. But it was all worth it for the views at the top! We spent some time taking pictures of the city then made the trek back down. 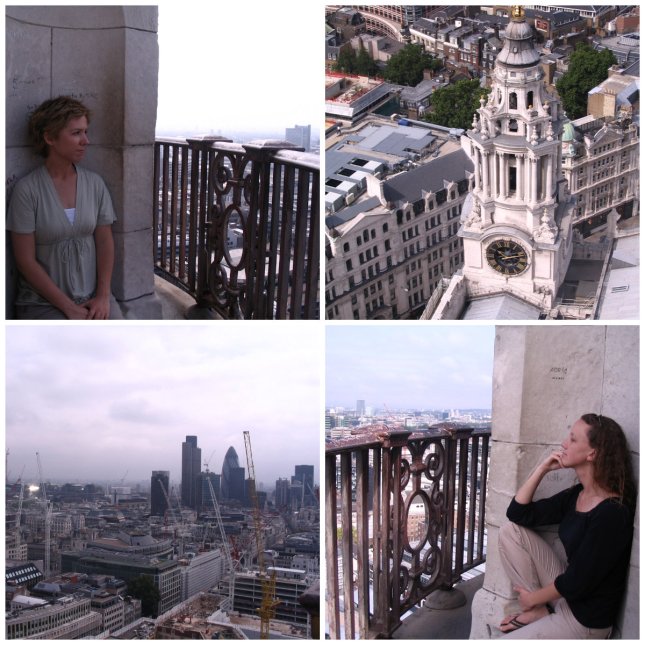 London has quite the crane collection as we discovered from our view atop St. Paul’s

On to Paddington Station! What a huge, crazy place! At least to me. 🙂 We bought tickets to Windsor then spent the next fifteen minutes trying to figure out which platform we were supposed to be on. We finally found it and were off!

Windsor Castle is another unforgettable place. It’s so massive. The day had turned a bit dreary and cold so first on the agenda was some soup to warm our insides. 🙂 Then on to the castle! The town of Windsor is so quaint! I would love to spend more time there someday. 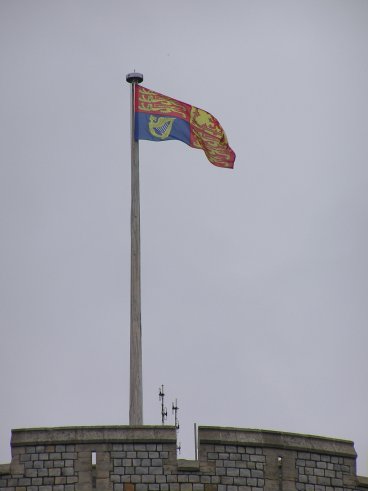 It felt very surreal to me walking onto the grounds of this castle. Maybe because it’s the first castle I had ever visited? Okay, that’s not true. I visited Blarney Castle in Ireland but it was nearly a ruin and nothing like this!

We walked around the gardens, admiring the beauty and trying to devise a way we could work here. Do employees get to live in the castle? Because I only want to work there if I also get to live there, of course. 🙂 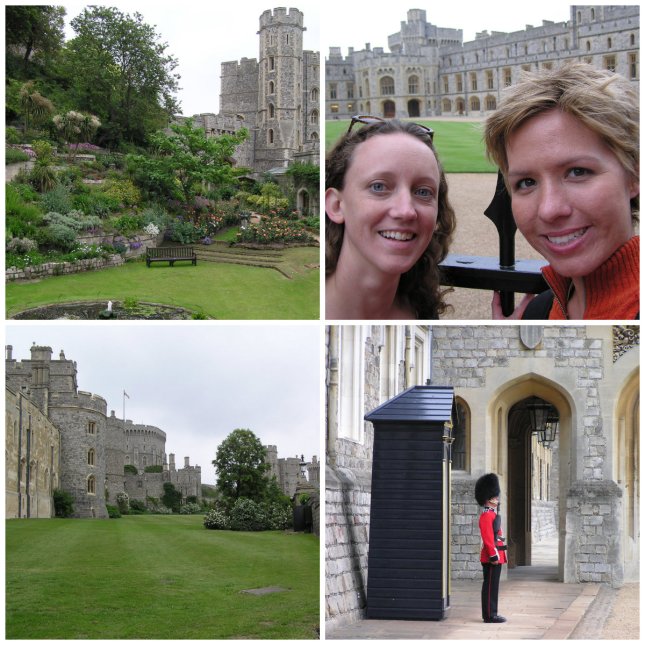 We finally entered the castle and toured the State Apartments. Incredible! Everything is ridiculously ornate and opulent. 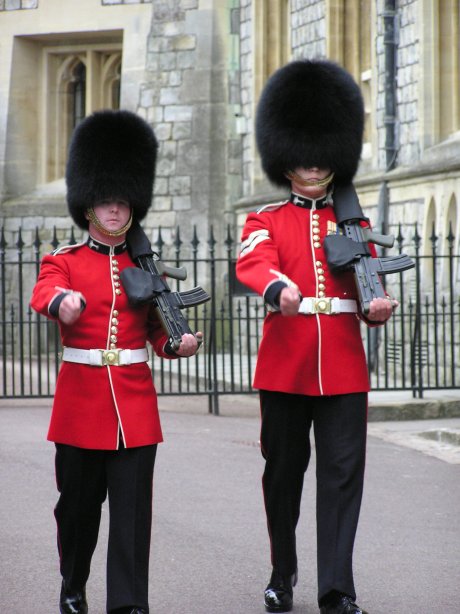 On a sad note, as we made our way back to the train station, we noticed that the Queen’s flag was no longer flying. Our one chance to see Her Majesty and we missed her exit! 😦

Back in London, we fought the rush hour crowds and delays on the Tube and arrived at the National Gallery thirty minutes before it closed. We saw quite a bit in the little time we had there, including works by Van Gogh, Raphael, Rembrandt, Michelangelo, and others. 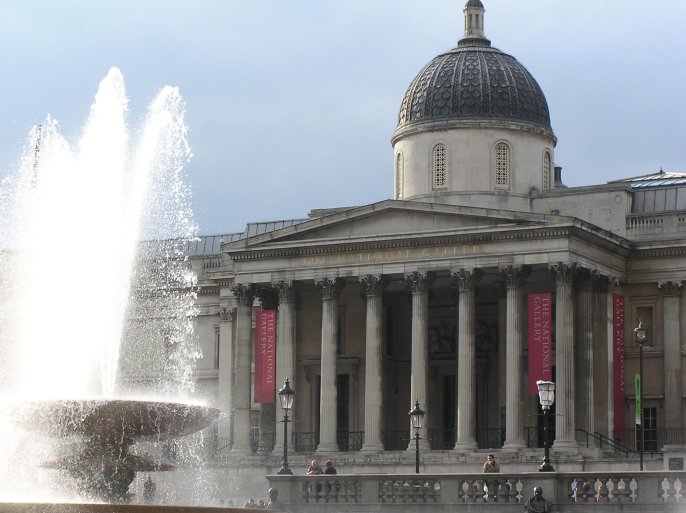 The National Gallery sits in Trafalgar Square which is full of PIGEONS!!! Okay, call me a tourist, but I wanted to feed the pigeons! “Feed the Birds” was always a favorite song of mine from Mary Poppins and now was my chance to have my very own Mary Poppins experience. Yes, I know, I can “feed the birds/pigeons” in Orlando, but it’s just not the same. These are London pigeons!

So we purchased some rice from a young Italian guy and were soon getting up close and personal with the dirty beasts. Our rice supplier took my camera and proceeded to play the fashion photographer with us (or maybe it was the birds) as his subjects.

It was a fun experience which was marred a bit when a friend informed me a couple of weeks later that 1) it’s against the law to feed the pigeons in Trafalgar Square, and 2) the rice kills the birds (although I’ve since learned the latter is untrue). Oops.

Leaving our feathered friends, we ate dinner at Wagamama – a Japanese noodle bar that had been recommended to us. It was pretty darn tasty and after dinner, we wandered the streets a bit. Our wanderings took us to the U.S. Embassy. This is where our second crime of the day occurred when we took pictures of the Embassy (a big no-no apparently). We were, again, informed of this a couple weeks later. Our time in London turned us into straight up delinquents! 🙂

Our final full day in London was another busy yet fun day. We started at the TKTS booth in Leicester Square and purchased half-price tickets to see Les Miserables that evening.

Then we headed to the Tower of London. First things first: the crown jewels. So impressively ornate they almost didn’t look real (not that I would be able to tell real jewels from fake ones anyway). I snuck a couple of pictures and got caught by a guard. Fortunately, he was on the moving walkway opposite the jewel cases and couldn’t get to me to confiscate my camera. Sheesh! My felonious behavior continues!

Next on the agenda was a Yeoman Warder (or Beefeater) tour. The Yeoman Warders have been guarding the Tower since 1509! We had a great tour guide who was very funny and shared with us many stories of the Tower’s history as a jail, place of torture, residence, and place of execution. The tour was very entertaining. 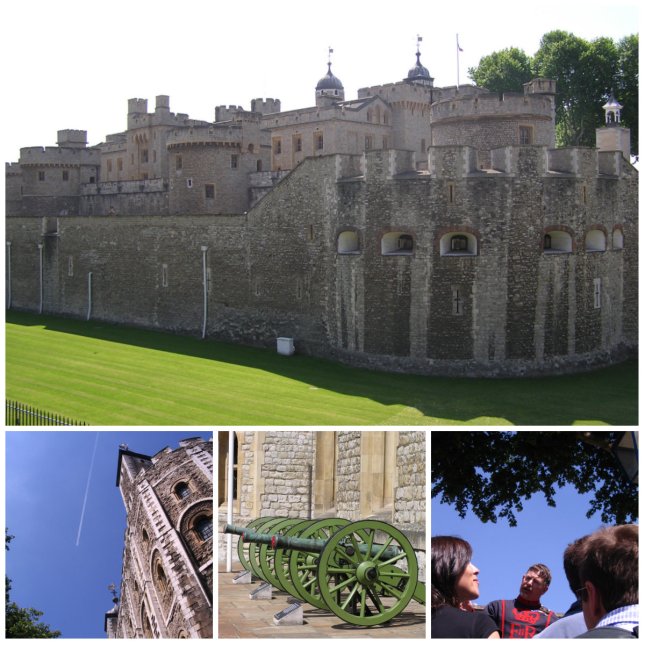 After the tour we visited the White Tower, which is the oldest tower. It was the former home of kings and queens and was very dreary inside due to the 12-foot thick stone walls it’s fashioned out of. A quick walk through the torture room (such violent-looking contraptions it contained!) and we were finished with our time at the Tower of London.

Up next was a visit to Kensington Palace. Listening to our audio guides, we toured the State Apartments. There was an exhibit on display honoring Princess Diana, which contained many great photographs of her as well as some of the dresses she wore.

Our day ended wonderfully as we saw Les Miserables portrayed on stage at the Queen’s Theatre. We had fantastic seats and I was quite impressed with the concession man who was walking through the theater selling cups of Haagen Dazs ice cream. I think this needs to be a practice at all theaters. Well, now my more health-conscious self would have to say coconut milk ice cream instead of Haagen Dazs. 😉

The show was fantastic and the perfect end to our stay in this city that I grew to love!

After we arrived in London, we each purchased The London Pass, which is a sightseeing card providing entrance to many attractions in and around London. We used this for St. Paul’s Cathedral, Windsor Castle, The Tower of London, Kensington Palace, and other places. If you are planning on visiting multiple attractions that are covered by this pass, it can really save you a lot of money. We even received a discount off our meal at Wagamama! 🙂

As previously mentioned, we purchased our tickets to see Les Miserables at the TKTS booth in Leicester Square. They sell same day, half-price tickets to many shows. We had actually gone here a few mornings to see which shows were available, but it wasn’t until our final morning that tickets were being sold for one we wanted to attend. So just keep checking! The tickets being sold changes every day. And it’s probably a good idea to arrive before they open – the lines can get pretty long!