And what better place to be during the national day of Canada than the nation’s capital? It’s like being in Washington, DC on the 4th of July. So much fun!

My Aunt Georgann and I continued our Canadian vacation by traveling from Niagara Falls to Ottawa. We pretty much spent an entire day making our way northeast by train. I haven’t been on a train since my last trip to Europe in 2008 and I forgot how much I love this mode of travel! And this train had free Wi-Fi – bonus! 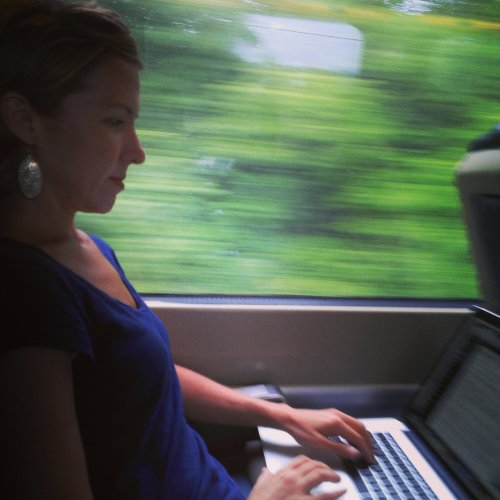 Working on my blog while the scenery rushes by

We had a one and a half hour layover in Toronto and left the train station to grab a quick bite to eat for lunch. We didn’t venture too far, and ended up at a Chipotle, which happens to be one of my favorite places to eat back home. 🙂

We were delayed getting into Ottawa and didn’t arrive until after 8:30 in the evening. A quick cab ride to our Airbnb accommodations where we dropped off our bags, then back out again to find something for dinner. We ended up at a pizzeria and each scarfed down two slices and a salad.

The following day we picked up some breakfast (delicious multi-grain croissants from Prinzo Cafe & Patisserie) then headed toward Parliament Hill. Many of the Canada Day festivities were going to be taking place at this site the following day, and the place was hopping with all of the preparations being made.

Yes, I took a picture of my amazing croissant

Let me just pause for a minute to say that both of us were very excited to be escaping the Florida heat for a couple of weeks. Until, that is, we arrived up north and discovered that it’s just as hot here. This is Canada!!! The frozen tundra!!! We were not expecting the soaring temperatures and unbearable humidity that feels just like Florida. Insert sad face: 😦

Anyway, our strolling around led us to the ByWard Market which I absolutely loved! It covers quite a large area, up and down many streets, and can be a bit overwhelming, but there’s just something about markets like this that makes me smile.

We walked around, checking out some shops and cafes, then decided to get some lunch at Cafe 55. A perfect lunch consisting of a trio of salads for me and a panini for Georgann.

Once refreshed with food, we headed to the Rideau Canal to board a ferry for a boat tour of the river. We boarded the Capital Cruises vessel and sat up top for an hour, narrated tour of the Ottawa River, which divides the provinces of Ontario and Quebec.

And this is where I learned that Ottawa is the capital of Canada. And the Parliament Building here is for all of Canada (I’m not sure what I previously thought it was for). And the Canadian Prime Minister lives here (in a very lovely house on the river). As well as the Governor General (I was informed on this tour what a Governor General actually is). It’s amazing how much you can learn during an hour boat ride. 🙂

It was a very pleasant trip and our narrator was very informative. It was also very hot when the clouds weren’t hiding the blazing sun. We both might have gotten a bit sunburnt. Oops.

Once the boat tour was over, we decided to head back to our apartment to rest for a bit and hopefully cool off. We did rest, but didn’t really cool off too much as our apartment doesn’t have A/C. If you’re ever in Ottawa during the summer, it might be wise to confirm in advance that your accommodations have air conditioning. 🙂

We headed back out a bit later for dinner and meandered down different streets trying to decide on a place to eat. Our meandering took us to Sparks Street, which is a pedestrian-only street lined with shops and restaurants, just a couple of blocks from Parliament Hill.

We chose to eat at 73 North Restaurant because it appeared to have decent prices, an extensive menu, and a dining area in the middle of the street. We both ordered Lebanese dishes and they were pretty good.

Georgann became a big fan of Canadian beer on this trip

Just a stone’s throw from our table was a Beaver Tails shack and since Georgann had never had one before, we just had to indulge. The last Beaver Tail I ate was in Vancouver and this time I had one with maple butter on it. Yum!! The perfect end to our day.

We booked all of our accommodations during our two weeks in Canada through Airbnb. I had used this site once before in Seattle and it was great! Our accommodations in Ottawa was a one-bedroom flat in a really old building that had so much character. I just love old buildings!! Of course, many old buildings don’t have A/C and this one was no exception. I’m not gonna lie – it got pretty darn hot inside. But the location was good and the price can’t be beat.

The river tour provided a brief history lesson of Ottawa and was very enjoyable. There are various boat tour operators who all vie for your business on the bridge that crosses the canal. We went with Capital Cruises because they were slightly cheaper than some of the other ones. The boat has three levels, the top one being uncovered, and snacks and drinks are sold onboard. Current prices are $22 CAD for adults.

While in Ottawa we didn’t use public transportation but relied on our feet. 🙂 Our feet might have hated us after three days of constant walking but oh well. We did take a taxi from the train station to our accommodations because we got in so late. There is public transportation available, and depending on where you’re staying and what you’d like to see, it would most likely be needed.