Music (and Disappointment) in Montreal

Is anyone else ready for fall? I am so, so ready for my favorite season to get here already! Although, being a Floridian, we don’t actually experience “fall” weather until, oh, maybe December. Sigh. In fact, right now I hear the rumblings of another summer thunderstorm making it’s humidity-producing way through the warm evening sky. Right now it’s 70º and humidity-free in Montreal. Can I go back, please? 🙂

Well, until I can make it back to Canada, I’m just going to continue to reminisce about my fun times there this past July with my Aunt Georgann. For our final full day in the beautiful city of Montreal, we had a bit of a theme going: music.

We had a leisurely morning in our apartment, then packed a picnic lunch and headed out the door around 11:00. A quick metro ride later and we found ourselves at the Mount Royal Park which hosts a “festival” each Sunday during the summer called Les Tam-Tams du Mont Royal.

This lively, free festival consists of drummers, dancers and vendors who are there to enjoy the outdoors, each other, and life! Things kick off around noon when drummers start forming a circle near the Sir George-Étienne Cartier monument, and vendors start spreading out their blankets and laying out their handmade and not-so-handmade wares.

When we arrived, there were only about six drummers warming up and few vendors set up and ready to go. We hung around for a bit, wondering if this was all there was to it, then decided to find a bakery and pick up a few more items for our picnic lunch.

After we made our yummy purchases, we sat at a picnic bench in Jeanne-Mance Park, which is located across the street from Mount Royal Park. We thoroughly enjoyed our fresh baguette, cheese, quinoa salad and nectarines. Our picnic was only slightly marred by the crazy wind that blew in suddenly.

Once finished with lunch we made our way back to Mount Royal Park where we could hear that the festivities were now well under way! The number of drummers had swelled to over 30 and there were people everywhere: lounging on the grass, playing various instruments, throwing frisbees and footballs, and playing hacky sack (I was SO impressed with their skills!). And dancers – free-spirited souls expressing themselves through movement, regardless of talent. 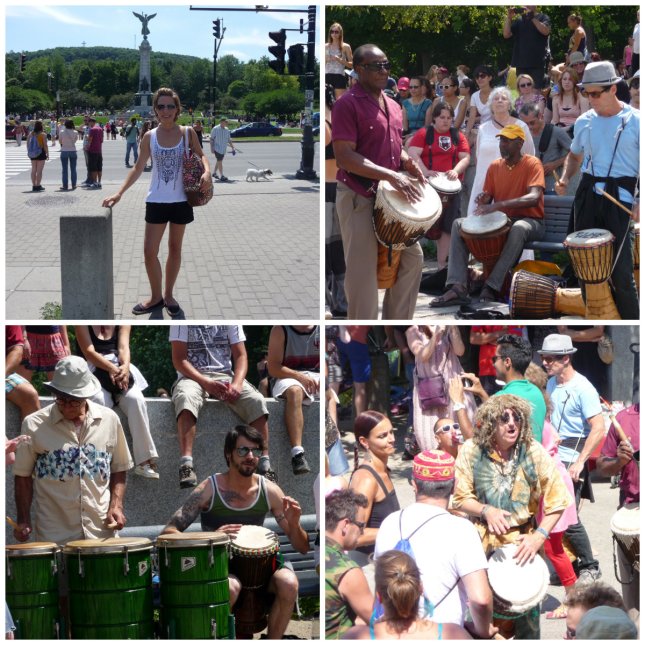 Georgann and I were amazed at the diverse array of people here from all walks of life. It was pretty cool to see so many different people join together for a day to enjoy the art of music and dance. Anyone and everyone is invited and encouraged to join the drum circle or show off their dance moves.

We watched them for a while then found a spot on the grass to eat some tartes we had bought at the bakery. Yum!!

After enjoying the drummers and dancers a bit more, we headed back to our apartment to get ready for our final evening in Montreal.

Both Georgann and I were so excited for our evening out!!! We had reservations at a highly-recommended restaurant and were going to attend the Montreal International Jazz Festival. And this is where my disappointment occurred.

The Montreal International Jazz Festival is an annual event that features numerous concerts, both free and ticketed. Some of the acts this year included Tony Bennett, Diana Ross, Aretha Franklin, B.B. King, Michael Buble and…Diana Krall. All of those were ticketed concerts except for…Diana Krall. I’ve been a fan of Diana Krall for years and have always wanted to see her in concert. I’m a huge fan of Tony Bennett and Michael Buble as well but I’ve seen them both in concert before (amazing!!!) and, as mentioned before, their’s were ticketed events.

I had gone online that morning to check out the acts on this Sunday to see if there was anyone we might want to see. When I saw that Diana Krall was going to be there and her concert was outdoors and free, I nearly had a fit. I was so, so, so excited to see her live! And the concert venue was right next to the restaurant we were dining at that evening! This, I was quite sure, was going to be my favorite evening of our entire two weeks in Canada.

Well, after putting on our jazz festival best, we headed out. The festival is spread over numerous city blocks that are closed to traffic. There are many entrances and all are policed by security guards checking bags as you enter. As my bag was being carefully searched, I asked the security officer if he knew which stage Diana Krall was going to be performing at. He answered, “Diana Krall was here last Sunday. Is she performing again?” Say what?

I quickly found an info booth, grabbed a festival guide, and anxiously scanned the program schedule. And there it was. Diana Krall was performing on Sunday. The previous Sunday. I couldn’t believe it. I was so disappointed! We both just stood there like deflated balloons. So much for me giving this evening the award for “Best Evening in Canada!”

I kept staring at the program hoping that the little box with Diana Krall’s name in it would miraculously move over seven spots. But it wasn’t meant to be.

Determined not to let our evening be completely ruined, we headed to Brasserie T! for dinner. This is the sister restaurant to Toque! – an award-winning Montreal restaurant. Brasserie T! is located in a long, glass, box-like building that appears to have just been set down on the wide sidewalk.

It’s a very popular restaurant and the food was fantastic! The service, not so much. But the food pretty much made up for it. 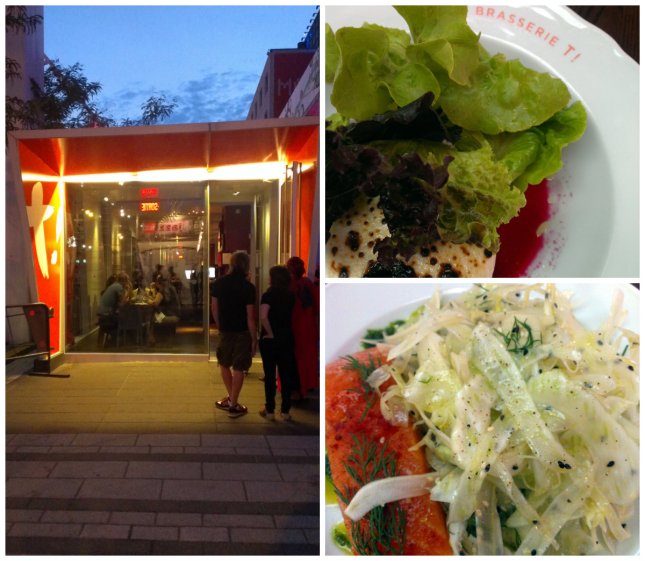 After dinner we headed to the stage where Diana Krall had played the week before (sniff, sniff) and where Deltron 3030 was closing out the festival. I had never heard of this group but we decided we had to attend at least one concert while we were here.

I guess different people have different opinions on the definition of “jazz.” Everyone I’ve mentioned so far I think I would classify as jazz. Deltron 3030, Snoop Dogg, Barenaked Ladies, Earth, Wind & Fire….um, no.

We stayed for two numbers then decided to head home. A slightly disappointing end to the day, but the rest of our time in Montreal was so wonderful that it completely made up for it! Next stop on our Canadian tour: Quebec City!

The Tam-Tams Festival occurs every Sunday at the Mount Royal Park from around the beginning of May to the end of September. It’s a very lively, fun atmosphere and many people make a day of it. I didn’t get to explore much of the park but it looks lovely with many winding paths and shady areas. If you have a drum, bring it! People were constantly coming and going from the drum circle – it was such a convivial atmosphere.

A slight word of warning for families (or anyone, I guess): as I mentioned before, there are many free-spirited people who come to this festival. And I do believe that some of their “free-spiritedness” was greatly enhanced by the fact that pot-use is alive and well in Montreal. I went to bed that evening with a headache, scratchy throat, and just general “weird” feeling after being surrounded all day (here and at the jazz festival) by this foul-smelling smoke.

But I definitely think hearing the drums is such a wonderful experience! If you’re not right in the middle of the crowds then the smoke shouldn’t be an issue.

The two-week Montreal International Jazz Festival takes place every July. It’s a great place to just wander around and catch an up-and-coming act or an old favorite. I wish we had been able to visit the festival grounds a bit earlier in our trip and perhaps see a more “jazzy” concert. Maybe next year! 😉