What Happens in Vegas…

Don’t get overly excited now. Nothing too crazy occurred during my recent visit to Sin City. Does that make me boring? Quite possibly. But I’m okay with that. 🙂

That doesn’t mean, however, that my visit to Las Vegas was boring. I took my first trip to this over-stimulating city this past July for work. I spent six nights at the Aria Resort & Casino, working during the day, and staying up late each night seeing, doing and eating as much as I could.

My first few hours in this crazy place didn’t do much to impress me. My flight landed after midnight and as I walked through the airport to baggage claim, all I could think was that this was the nastiest, smelliest, most out-dated airport I had ever been to (at least in the U.S.). I was actually pretty shocked.

And then I walked outside to wait for a cab. (And wait. And wait.) I live in Florida. It gets pretty darn hot in Florida during the summer. But even so, I’ve never seen this at nearly 1:00am: 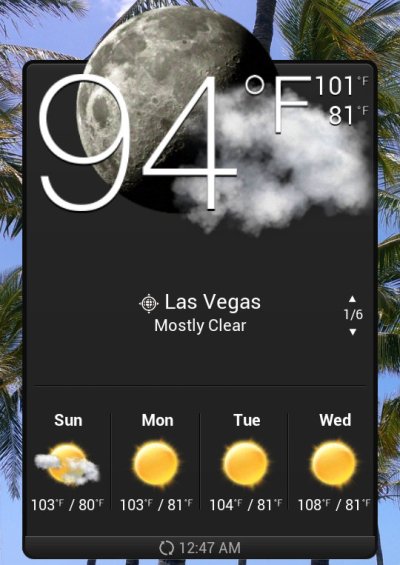 I finally made it into a cab for the short trip to my hotel. Las Vegas Blvd., aka The Strip, was 1) so much bigger than I was expecting, and 2) even crazier than I was expecting. I was already starting to feel overwhelmed by this city (aided, I’m sure, by the fact that it was now 4am “my” time).

I’ve always heard that this is the city that never sleeps but I guess I never realized that that is exactly what it is. As I was checking into my hotel, I couldn’t believe how many people were out and about – the casino was packed! Well, I think some of the energy must have affected me because by the time I made it up to my room, I was wide awake and stayed up until 3am (6am Florida time).

A few hours later I received a text from my friend, Teresa, letting me know her flight had just landed. I was so happy she had agreed to meet me out here so I’d have someone to hang out with during the evenings!

Most of our first day was actually spent working. Teresa was kind enough to assist me with prepping for the convention I was working so I could finish up quicker and we could get out and start exploring! We finally finished around 5:00, went up to our room to freshen up, then outside to sweat. 😛

People had told us prior to our trip that places will look like they are close by but it will take forever to walk to them. And they were absolutely right. We did a lot of walking the few days we were here! We had made a list of hotels we wanted to see and decided to start with one of the furthest from us which was The Venetian.

I’ve never had a huge desire to go to Las Vegas other than to see the spectacularly themed hotels that line the Strip. The Venetian was a good one to start with because it was pretty spectacular! All of the hotels are huge and seem to go on forever.

We walked along the “Grande Canal”, checking out restaurants and shops and watching the gondolas float by. One thing I found out really quick is that nothing is cheap in Las Vegas! Particularly dining. We settled on eating at Tintoretto Restaurant – a small Italian establishment. To put things into perspective, The Venetian is so huge, it contains thirty-eight restaurants!! That’s just insane. But, all of the ones we saw were packed so I guess they’re needed! 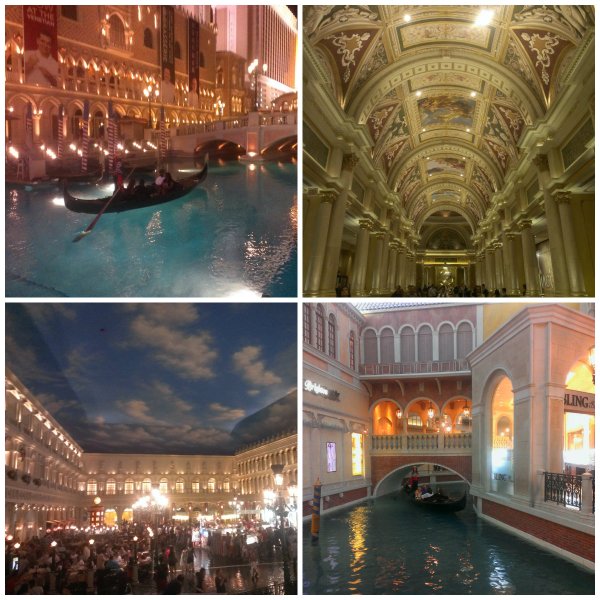 Our meal was pretty unmemorable so we decided to have something exciting for dessert. 🙂 We had visited the Godiva boutique before dinner and it was pretty much a no-brainer that we needed to return after dinner to pick up some chocolate goodies.

But first, we made a fun stop at the Hervé Léger store. Hervé Léger is a French fashion designer who started the “bandage” dress trend. I’ve seen his clothes on so many celebrities and have always wanted to try on one of his dresses.

When I saw this store, I just had to go inside. The sweetest lady worked there and as I was looking through some racks of dresses, she approached and asked if she could assist with anything. I decided to be completely upfront and truthful and told her there was no way I could afford these clothes but had always wanted to see them in person.

She then proceeded to ask if I would like to try some on just for fun. Um…yes? I couldn’t believe it. She was so fun and Teresa and I had so much fun trying on dresses (along with shoes she provided for us) while she played photog and made us model everything we put on. It was seriously such a wondrously fun experience and pretty much made our night! And it confirmed to me that I need a Hervé Léger dress in my wardrobe….

Leaving our modeling career behind us, we headed to the Godiva shop. 😀 We both decided to try a Trufflelata – so yummy! 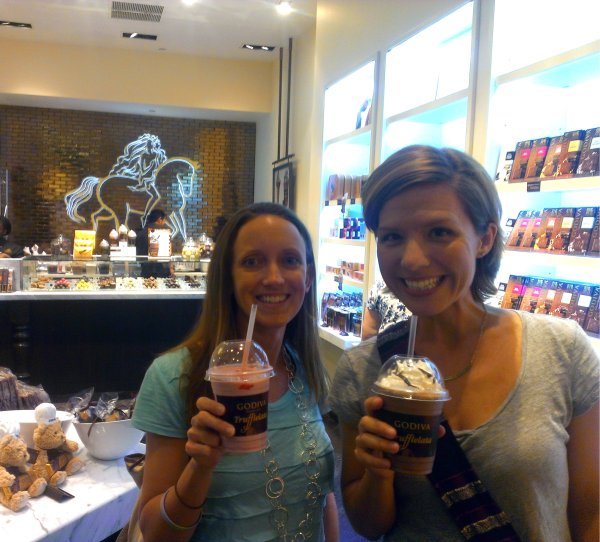 While sipping on our luscious treats, we made our way back through the hotel and outside. A long, hot walk brought us back to the Aria where we decided that after already spending 24 hours in Las Vegas, it was high time we tried our luck at the slot machines. 🙂

Our first full day in Las Vegas was fun, but I was still not very impressed with this city and pretty sure I would never want to return. But my tune would soon change… 🙂

My accommodations at the Aria Resort & Casino were arranged and paid for through work, and after visiting many other hotels along the Strip, I was so glad I was staying at this one! It might not be as exciting as some of the other properties, and it doesn’t have a “theme”, but I absolutely loved it!

It’s fairly new, built in 2009, and has many modern amenities including “smart” rooms. When I first arrived and opened the door to my room, the window shades automatically started opening to reveal the Las Vegas skyline. I was pretty impressed. And it’s just a really beautiful hotel. I could go on and on about why I loved this hotel but I’ll spare you all of that nonsense. 🙂

If you’re planning on visiting Las Vegas, bring your walking shoes! Yes, you can take cabs everywhere but car traffic is crazy (almost as congested as foot traffic 🙂 ). Even though it takes a long time to walk, it could possibly take you just as long to drive depending on the time of day.