Need I even mention that my sixth morning in Paris during my 2007 summer in Europe started with yummy French pastries? Probably not. I think I’ve made it pretty clear that I have a serious addiction. Which again, is a good reason why I should probably never live in France.

But moving on. 🙂 I was very excited on this day because my travel buddy, Teresa, and I were going to take a lunch cruise along the Seine. We had made our reservations the day before at the Bateaux Parisiens ticket desk near the Eiffel Tower. We arrived, checked in, were given boarding passes, menus, and a cruise map, and waited until the boarding started.

We had paid a bit extra to sit at a table by the windows and I’m so glad we did! The boat was so nice and live music played throughout our cruise. We were immediately served bread, dried fruit, and sparkling wine, and we made a toast to our 10-week tour through Europe. 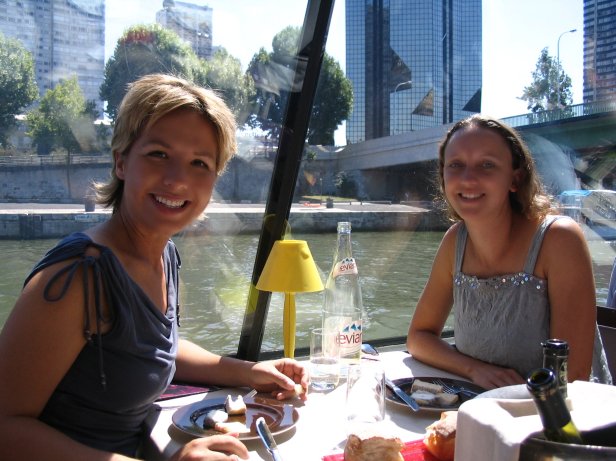 Sitting at the table next to us were two older French ladies. When it came time for the cheese course, Teresa, a non-cheese eater, set her plate aside. One of the ladies next to us pointed at her plate with a questioning look. Teresa informed her that she didn’t like cheese to which the lovely lady shook her head and said, “Tsk, tsk, what a shame!” Yes, I do love the French. 🙂

What a lovely time we had cruising along the river, eating fabulous food, and seeing many famous buildings and monuments (including the Statue of Liberty!). It was well worth the price and I’m so glad we splurged on it. A wonderful memory!

After disembarking from our cruise, we headed to the Rodin Museum which is free on the first Sunday of the month. We really just went to see The Thinker, and after seeing that famous statue as well as some other sculptures, we decided to get out of the heat for a bit and headed back to our apartment.

One popular and one lesser known view of “The Thinker”

I think this was the only day during our week in Paris that we spent any time in our apartment other than to sleep! We took a couple of hours off from touring the city and journaled and prepared a light dinner of bread, apples, and cantaloupe.

After refreshing ourselves, we headed back out and took the metro to the Eiffel Tower. The lines were just as long as the evening before, but we were there a bit earlier and were confident we would make it to the top before the sunset. And we did! After waiting in line one and a half hours to purchase our tickets (!), we finally made it onto an elevator and took it up to the second level.

We took so many pictures! Just fantastic views of the gorgeous sunset! We waited in line to go to the top level of the tower and made it up there while it was still just barely light and the city was starting to twinkle. What a view! We couldn’t have picked a better time to go up!

We spent about two hours on the tower and it was a wonderful experience. Back on ground level, we each bought a crêpe and ate them while looking at my favorite monument. 🙂 Another fantastic day in the City of Lights!

We decided to take a lunch cruise along the Seine as opposed to a dinner cruise because it was much less expensive. We booked our cruise through Bateaux Parisiens and it was truly a memorable experience. I suggest spending a bit extra to sit by the windows so you have an unobstructed view. We purchased “2nd tier” tickets and sat along the side of the boat – perfect.

There are many museums in Paris which are free year-round, or offer free entrance during certain days of the month. Granted, you might find some intense crowds during these free days, but sometimes it’s still worth it. I visited the Rodin Museum just to see The Thinker and wouldn’t have gone at all had it not been on one of the free days. But we had some time and it was free, so Teresa and I thought, “Why not?” Here is a link to a list of museums with free admission: Paris Info.

Going up the Eiffel Tower is a very fun experience. It is just so neat to actually be ascending up this huge monument! There are actually two ways to get up the tower: the lift and the stairs. We chose the lift but someday I think it would be a  challenge to take the stairs. At least up one level. 🙂 You can only take the stairs up to the first and second levels – to reach the top, you’ll have to board the lift.

The views from the Eiffel Tower are impressive, but I honestly think the best views we had over Paris were from the ferris wheel in the Tuileries Garden since those views included the Eiffel Tower. Either way, Paris is a wonderful city to see from above.