One Fine Day in Victoria, Canada

When writing previous posts on my trip to Vancouver, I think I may have implied that that was the only place I had visited in Canada. Well it isn’t. I’ve also spent a day in Victoria, Canada – the capital of British Columbia, located on the southern tip of Vancouver Island. I wish I had been able to spend more than a day exploring this city, but unfortunately I couldn’t, so I tried to make the best of the time I had.

I arrived in Victoria with my friend, Teresa, via a ferry from Seattle, Washington. We had been visiting Seattle for a few days and one of the things on our “to do” list was a day trip to Victoria. We had heard much of the beauty and quaintness of this city. So we arrived at the Seattle pier to board the Victoria Clipper IV in the early morning, bleary-eyed and tired.

As much as we both would have loved to have taken a seaplane to Victoria, our budgets suggested that we make do with the ferry. 🙂 The sea was a bit choppy as we departed Seattle and I think we were both a little worried about the possibility of experiencing some seasickness. But our stomachs adjusted to the rocking and swaying and we were just fine. We had both added a continental breakfast to our ticket order and we enjoyed eating that during our trip. 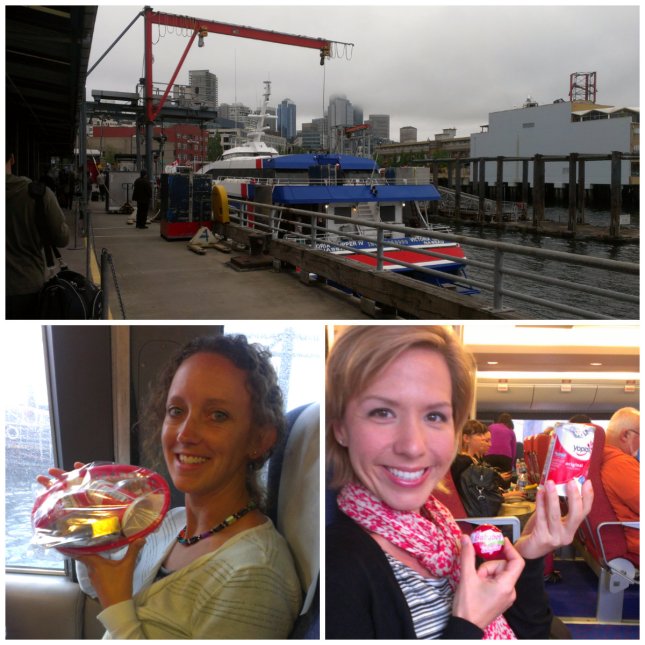 The skies had been pretty gray during most of the voyage, but as we approached Victoria the sun came out and the day ended up being pretty perfect. The ferry arrived at the harbor around 11:15 after a two and a half hour trip.

We didn’t really have any specific plans for our day here. We had initially considered visiting the world-famous Butchart Gardens, but after discovering that there is a $30 entrance fee (I naively thought it would be free 😛 ), we decided to ditch that idea and just wander around the city.

We did a lot of walking! But we both love to walk so it was fine for us. 🙂 We walked past the government house, saw the statue of Queen Victoria, and took pictures of the numerous totem poles (and mimicked them, of course). 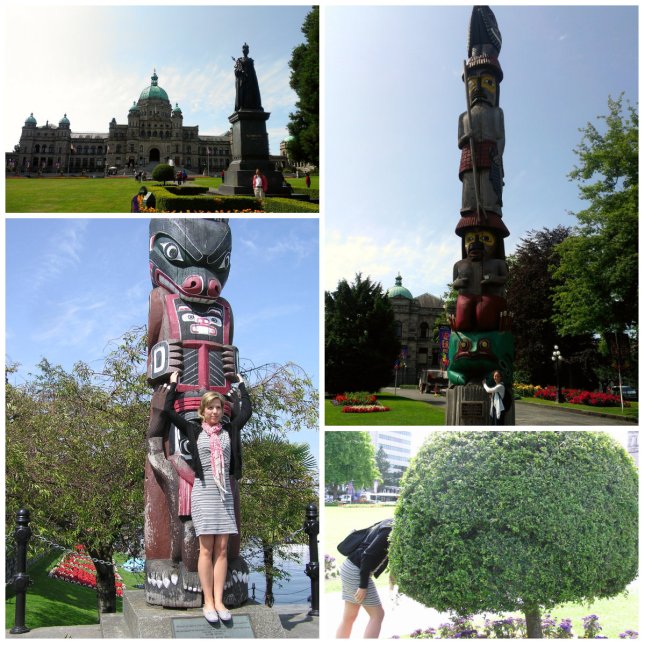 We walked through the Empress Hotel and thought we might enjoy our lunch there, but $25 hamburgers quickly dispelled that idea. What we really wanted to do was enjoy their afternoon tea, but at $50 per person (it’s tea, people – not liquid gold!), we also decided to forego this activity. Maybe another day when I don’t mind dropping $50 on tiny sandwiches and a drink I don’t even like. 🙂 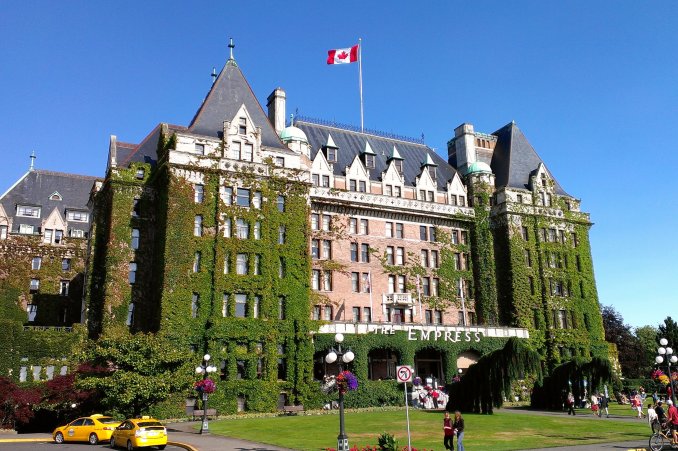 So we wandered around some more until we came to Darcy’s Pub and decided to stop there for some grub. I’m so glad we did because we got to experience something that I thought was pretty cool (other than our yummy food 🙂 ). This was the day of the Opening Ceremonies of the 2012 Summer Olympics. The pub had multiple televisions situated throughout and each one was tuned to the live ceremonies. It was neat being in Canada, watching the Olympics happening live in London. I love that the Olympics bring the world together as one, if only for a couple of weeks. And when it got to the Queen’s starring role in the ceremonies, a hush came over the pub as every eye was trained on the event. There may have even been some cheering as she “parachuted” into the stadium. 😉

I don’t think either one of us wanted to leave the restaurant, but our time was limited so we made our way back outside. And if we hadn’t left when we did, we would have missed the Michael Jackson wannabe in the square just outside the restaurant. He was really feeling the King of Pop.

After picking up some really not-so-great cupcakes at a local bakery (what a waste of calories!), we made our way to Beacon Hill Park.

We thoroughly enjoyed walking along the many trails, admiring the beautiful gardens, and regressing to our childhood when we found a field of dandelions. 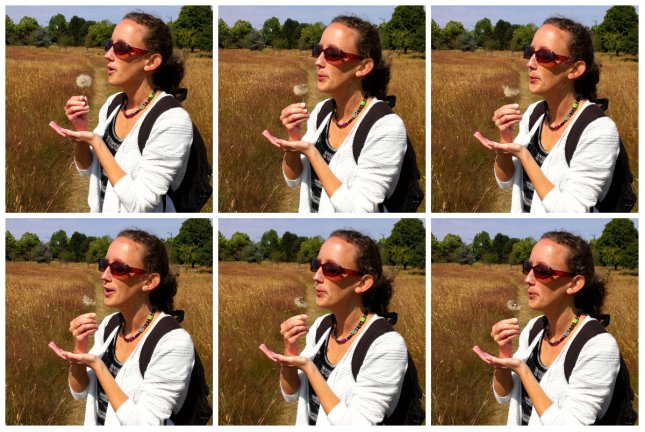 We walked through Beacon Hill Park to the waters of Juan de Fuca Strait where we then enjoyed traversing the trail that runs along the coastline. This was a delightful walk and we just couldn’t take in enough of the incredible beauty that surrounded us!

Our walk took us to the Ogden Point Breakwater. We carefully considered the warning signs at the start of the breakwater but decided to take our chances anyway. 🙂 We walked all the way to the end, praying along the way that we wouldn’t get blown over the edge.

After all of our walking, we were in need of some refreshment, so we made our way back to the city center and Rogers’ Chocolates where we chowed down on some delicious chocolate covered ice cream bars. 🙂 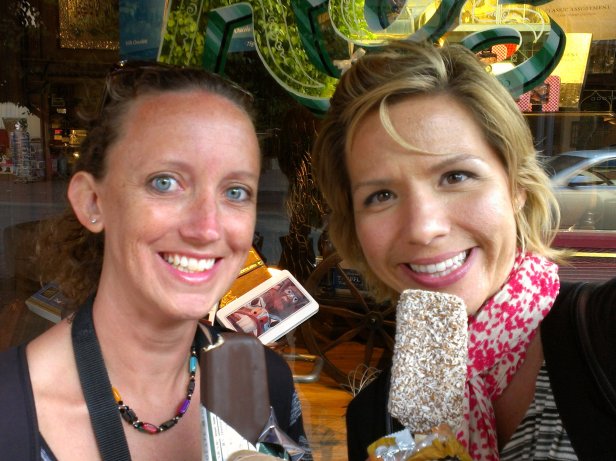 Knowing that we had missed so much of what this city has to offer, but also knowing we had a ferry to catch, we headed back to the pier for our return trip to Seattle.

Victoria is a lovely city, full of wonderful shops and dining, historic buildings, and beautiful outdoor spaces. I would love to return some day and spend more time exploring!