Foggy, rainy England? During my 2007 summer in Europe I spent a total of two weeks there and only had one day of each – my first day in London (rainy) and my trip to the coast while I was staying in York (foggy). The first was pretty miserable (jet leg might have contributed to that) but the second was just amusing. I’ll get to that one in a minute. 😉

But first, my quest to find Mr. Darcy from Pride & Prejudice continued with a trip to Stamford in Lincolnshire. My friend, Teresa, and I drove there from Bakewell and our first stop was Burghley House, built in the 1500’s and used in the 2005 film as Rosings Park, the home of Lady Catherine de Bourg.

What a huge, impressive place! We toured part of the home and saw two rooms that were used in the movie (unfortunately, photography was not allowed inside) as well as some costumes that were worn in the film. We then walked around the grounds and found a spot on the lawn under a tree to eat some lunch. What a perfectly perfect day to have a picnic! 🙂

Leaving Burghley House, we made our way toward Stamford town and found Gwynne House, the B&B we were staying at, without any trouble (a miracle!). After checking in and dragging our suitcases to our room, we headed out again to walk to town.

Stamford was bustling on this beautiful Saturday and we enjoyed wandering along the pedestrian-only streets and walking through the market. Stamford doubled as the town of Meryton in the movie and being there was like stepping back in time – winding streets, many of them cobblestone, lined with medieval stone buildings. I loved it!

After spending time in town, we headed back to our B&B for the evening. The next day we packed up again, enjoyed another lovely English breakfast, and headed to York. We were staying at the YHA York and after checking in, we did a repeat of the day before – headed into town on foot. 🙂

We walked along the River Ouse into the city and searched first for a place to eat lunch. We ended up at a place called Varsity and each got huge hamburgers. 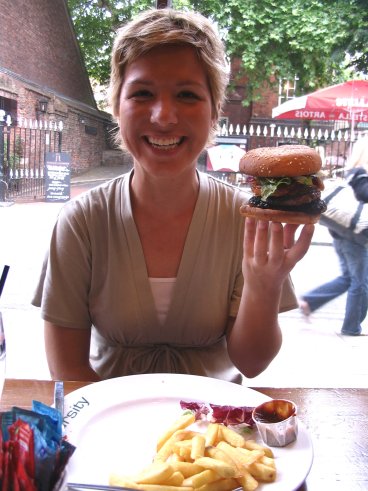 After filling our tummies, we walked around the city for a bit. York is home to the York Minster – the largest gothic cathedral in Northern Europe. I would have loved to have gone inside but our wallets were a bit bruised after spending almost two weeks in the UK so we decided to just admire the cathedral from the outside. 🙂

Next we headed toward the Shambles, an old, narrow, medieval street in the city with overhanging timber-framed buildings, some dating back to the fourteenth century. I could almost picture the street as it might have looked centuries ago: clothes lines crisscrossing it and people dumping pails of who-knows-what out the windows. I loved it!!

After walking around the city a bit more, we decided this would be the perfect day to take our lovely rental car out for a spin with the top down. So we headed back to our hostel. And since we were missing Florida and its beautiful beaches, we decided to drive to Scarborough, which is on the coast.

We put the top of the car down, cranked up the music, and were looking forward to staking out a spot on the beach to enjoy our fudge in sunny England!

But “sunny” England had other plans. It took about an hour to get there and when we arrived, it was to discover…fog. Incredible fog. We could hardly see the water from the beach. A blanket of fog covered the entire area as far as the eye could see (which wasn’t far).

It didn’t keep people away though as the main drag was hopping! We decided to head south and see if it cleared up at all. I think it got worse and at this point we were freezing! Of course we were still driving around with the top down and our sunglasses on, so I’m sure there was no doubt in the minds of the locals we passed who were bundled up for Antarctica that we were most decidedly tourists.

Well, us Sunshine State girls couldn’t take the chill any longer so we decided to head back to York. A couple of miles from the coast was this:

Our good spirits returned, the radio got cranked up again, and the fudge got eaten – outside the laundry room at our hostel. 🙂

Our time in England had come to an end, but our road trip continued to Scotland. We never did find Mr. Darcy, but we still thoroughly enjoyed our time traveling through England: the grand estates and fun castles, the quaint little towns, the beautiful countryside, and McVitie’s Milk Chocolate Digestives (we became addicts). 🙂

While in Stamford we stayed at Gwynne House, a lovely little bed & breakfast. It’s just outside the town center but a very easy walk into town. We had quite a time nailing down accommodations in Stamford and didn’t find this place until the day before we arrived (with help from the Bakewell Tourist Information office). We stayed in a double room with the bathroom right outside. Current rates start at £60 and include your choice of a traditional English breakfast or a lighter continental breakfast.

In York, we stayed at the YHA York, a youth hostel just outside the city (but within walking distance). We stayed in an 8-bed female dorm and current rates start at £10 per bed. They also have private rooms starting at £20 per bed. It was a typical hostel – nothing fancy – but nice and quiet.

Our entrance into Burghley House was included in our British Heritage Passes (no longer sold). The current entrance fee is £13 which includes a visit to the house and gardens.

York is a pretty large city with quite a bit to see and do. We didn’t really take advantage of all that the city has to offer and I would love to visit again someday and spend a bit more time there.