A Weekend in Miami (and Another Half Marathon)

That’s right – two half marathons in two weeks. Because, why not? Which is exactly what I thought when my friend, Alfredo, texted me a few weeks ago to ask if I would be interested in joining him in Miami for another half marathon on February 2nd. Okay, that was my second thought. My initial thought was, “Are you insane???”

But the more I mulled the idea over, the more enticing it became. I was already trained up, would have two weeks between the Key West half marathon and this one, and would get another medal to add to my collection. 🙂 So I said “Yes!!”

What I didn’t anticipate was getting sick the week leading up to this race. Oops. But by the time the weekend arrived, I felt great! Not necessarily prepared for another half marathon, but still felt good! 🙂

Alfredo, my friend, Teresa, and I headed to Miami on Saturday morning. Teresa opted out of running this race but tagged along for the road trip (and to be the best cheerleader ever!!). 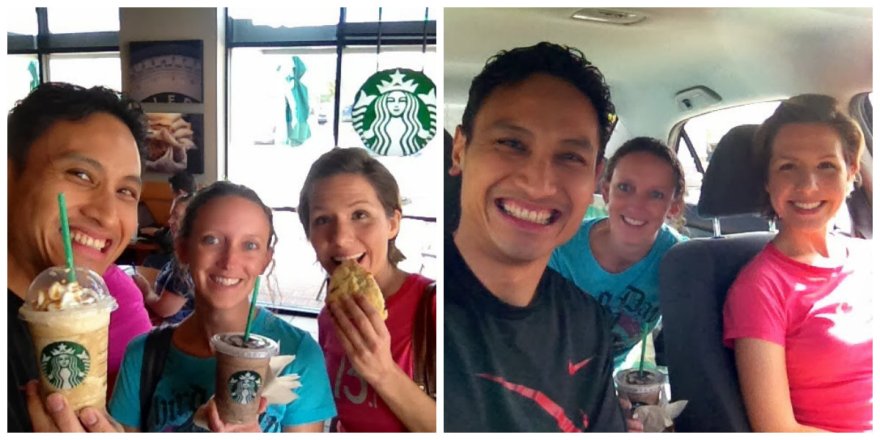 Starbucks in hand, ready to roll!

We went straight to the Miami Beach Convention Center where the Nissan Health & Fitness Expo was being held. At the expo we picked up our race packets, perused the plethora of running gear being sold, and checked out future races taking place throughout the world: Atlanta, Puerto Rico, Quebec, Paris… I think I need to start a race fund for all of these.

On to our accommodations for the evening: my cousins’ home where my Aunt and Uncle were also staying for a few days. We took the scenic route to their house along Old Cutler Road and passed many banyan trees and many homes the size of hotels. A really beautiful area with some lovely looking parks that I would love to visit someday.

My cousin, Laura, and her husband, Charles, were kind enough to open up their home to us and also make a wonderful spaghetti dinner to carb us up for our race. 🙂

Two 3:30am wake up calls in two weeks is two 3:30am wake up calls too many. I’m done with those for a loooong while! Teresa, Alfredo and I were out the door before 4:30 and on our way to the American Airlines Arena, home of the Miami Heat and the start of the marathon and half marathon. We were a bit concerned about traffic and available parking, but we were pulling into a parking spot a block from the start line by 5am. Yay!!

We had arrived pretty early and spent some time walking around, stretching, and taking pictures.

Teresa was able to stay with us right up to a few minutes before we crossed the start line. 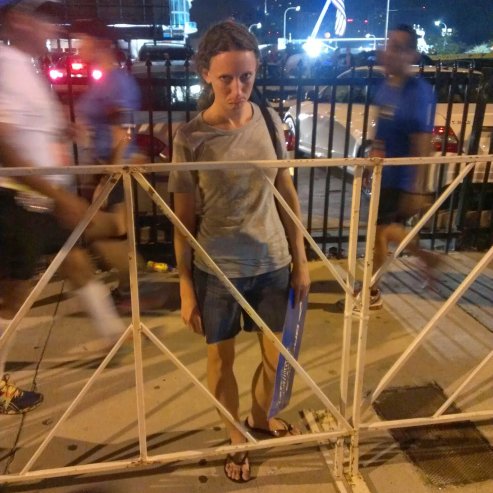 The first race I have ever run without Teresa. 😦 She was just as sad.

The sky was starting to lighten as Alfredo and I made our way to the start line. There were over 25,000 people who ran either the full or half marathon and we were in the fifth corral to start – about twenty-five minutes after the first group.

Although I had posted my best half marathon time two weeks earlier at the Key West Half Marathon, I was still a bit nervous about this race. I hadn’t kept up with my training between the two races and as mentioned earlier, had been sick for a few days. But ready or not, it was time to run!

A quarter mile from the start line was a bridge. Which translates into: large hill. I guess it was good to get it out of the way at the start. 😉

This race passed through some really pretty parts of Miami Beach. In fact, the majority of the half marathon route took place on the Miami Beach side of the inter-coastal. We ran past many cruise ships (I was a tiny bit jealous of their occupants), the art deco buildings of South Beach, and some beautiful residential areas.

Disclaimer: I was running while taking these photos

I have to admit that I struggled on this race. The temperature was very warm and the sun was out in all it’s glory. I started getting a bit overheated over halfway through the race and might not have finished had it not been for my running buddy, Alfredo, pouring water on my head at the hydration stations and being so sweet to stick with me even though I was slowing him down; and for Teresa who was waiting at mile eleven to cheer us on and encourage me to keep going, even running with us for a bit in her flip flops. 🙂 I really do have the absolute best friends.

Mile 13.1 finally came and I very happily crossed the finish line with Alfredo! Whew!! We walked around, ate some bananas and drank some water, and watched as storm clouds starting to blow in from the east. Um, where were those at mile nine???

We caught up with Teresa, took cover as it started to rain (see previous sentence), and ate and stretched some more.

We finally started making our way back to our car. But first, Teresa and I had to introduce Alfredo to one of our “things” we do when we travel: mimic statues. Yes! 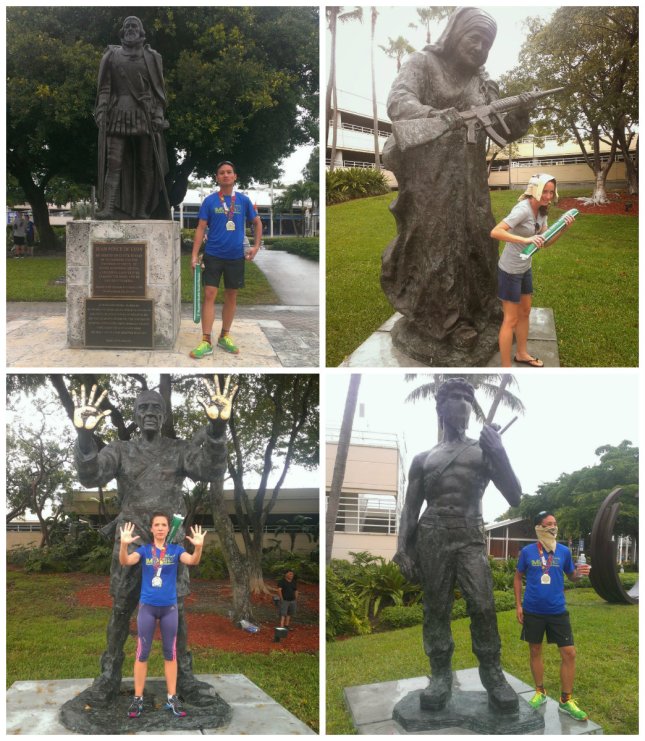 Back to my cousins’ to shower and pack, then to Panera Bread for lunch with my family. (Who I found out were all somehow under the impression that I had won the Key West Half Marathon. Say what?!? Believe me, I would have announced that on the front page of every newspaper in the state!) 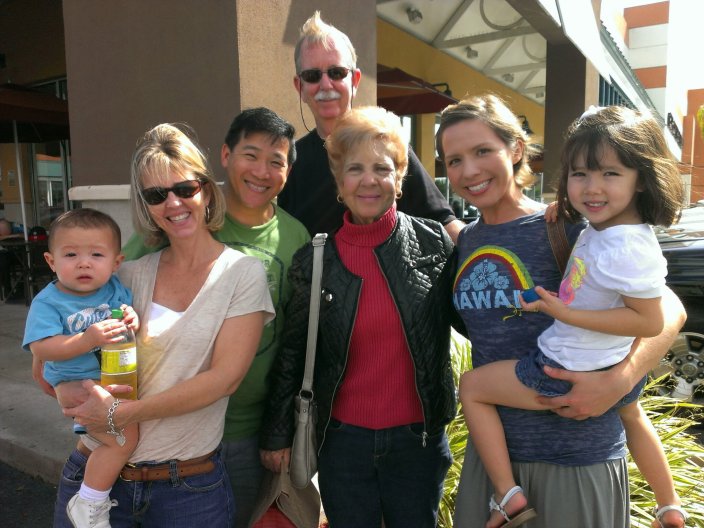 Another fun weekend and another half marathon under my belt! Looking forward to the next one!!