In Deutschland with My Brother

My brother has threatened to stop reading my blog unless I write about my time spent with him in Germany. He’s a little narcissistic like that. Just kidding. (Love you, Andy!) So I’m hoping this post will appease him. 🙂

My friend, Teresa, and I spent the summer of 2007 traveling throughout Europe and then returned again in the spring of 2008 to spend a few months in France. During this time, my brother was flying for an airline that made frequent trips overseas. And it just so happened that he was going to be in Germany for a few days while I was in France. I knew I could not pass up the opportunity of hanging out with my brother in Europe, so Teresa and I decided to plan a little “vacation” and visit him in Germany (along with a few other places).

After spending a few days in the Catalonia region of Spain, we hopped on a Ryanair flight to Altenburg, Germany. Once there, we picked up our rental car and drove to Leipzig where my brother was staying.

It was so cool seeing my brother in Europe! The one and only time we have ever been out of the country together! Our first order of business was to find something to eat for dinner. So we entered coordinates into our handy dandy GPS and it led us to…McDonald’s. I think I ate at more McDonald’s during the few days I spent with Andy than I did all of the other months I’ve spent in Europe combined. He’s not the most adventurous eater… 😉

He didn’t have to fly anywhere the next day so we decided to point our rental car north and drive to Berlin. Once in the city, we found a place to park our car and headed out on foot (and bus 🙂 ). 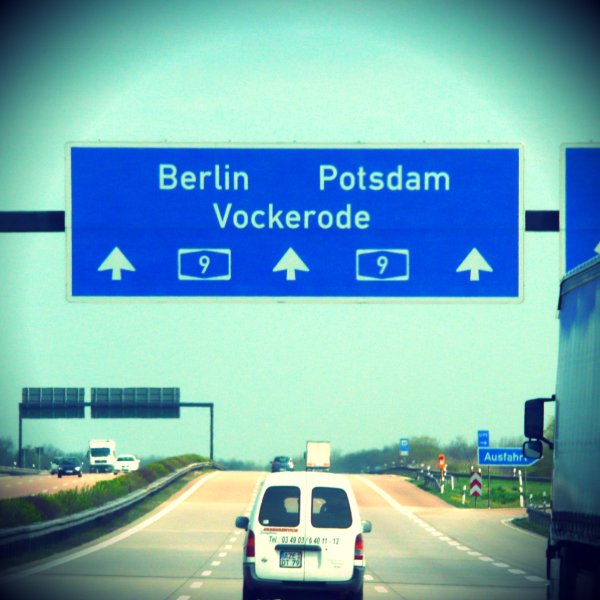 First stop was the Kaiser Wilhelm Memorial Church. This church, originally built in the 1890’s, sits in the middle of a busy, modern square. It was badly damaged in a bombing raid during World War II and only the spire of the original building still stands. Next to it is the new church which was built between 1959 and 1963.

The ground floor of the original, damaged spire has been turned into a memorial hall. We walked through this area and viewed photos of the church before the war, and what it looked like right after the bombings. Everything surrounding the church was completely destroyed and this church is the only remaining pre-WWII building in this area.

The new church next door is a very modern-looking building filled inside with 11,000 small, blue, stained-glass windows. And next door to that was a bratwurst stand…

After our oh-so-healthy lunch, we hopped on a bus and headed toward the Reichstag, passing some beautiful parks and modern buildings along the way. Once at the Reichstag, we really wanted to go up to the top of the dome but the lines were super long. Since we only had one day in Berlin, we decided that we would rather be out exploring the city than standing in line for hours, so we stayed long enough to take a few pictures and then left. 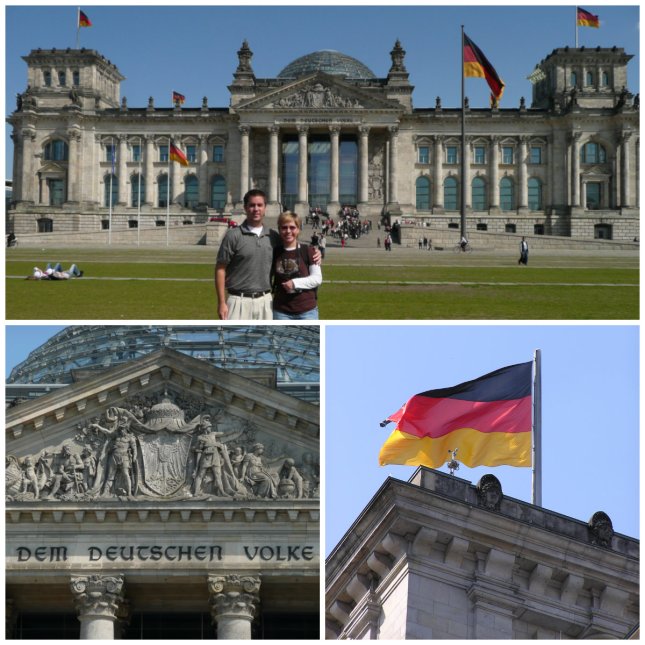 Next we walked to the Brandenburg Gate, an icon of Berlin and former symbol during the Cold War of the division between East and West. It’s also one of the few historic monuments to survive WWII.

Passing through the gate leads to the famous Unter den Linden – a wide boulevard running east-west. Before strolling down this street, we took a little detour and visited the Memorial to the Murdered Jews of Europe. This is a very unique memorial which contains 2,711 gravestone-like concrete slabs of varying heights.

Underground, beneath the memorial, is the Information Centre which consists of exhibition rooms featuring different images projected onto the walls and floors. It was a very chilling and sobering place.

Leaving there, we headed back to Unter den Linden and continued down this street, passing many interesting and historic places including museums, the Berlin Cathedral, the site of the infamous Nazi book burning ceremony, and the very tall TV tower which can be seen from all over the city. 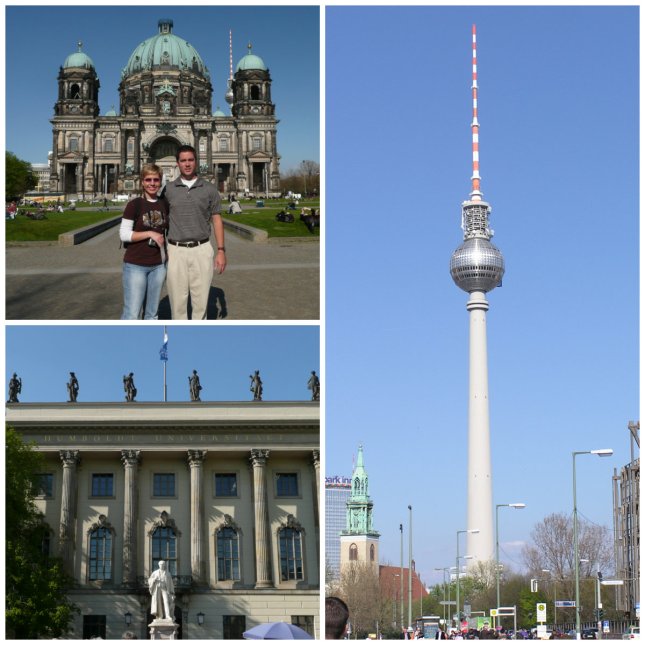 I think Teresa and I had pretty much worn Andy out by this point! 🙂 So we decided it was time for some refueling at…the Hard Rock Cafe. (For those of you new to the blog, it’s somewhat of a goal of mine and Teresa’s to eat at every Hard Rock Cafe on the planet. Good way to see the world, no?) This Hard Rock Cafe was pretty quiet at this time of day but we enjoyed our meal anyway.

Berlin is so different from any other European city I’ve been to. I think it’s because it seems so “new”. A large majority of it was destroyed during World War II so most buildings have been built within the the past 60 years or so. It’s the only city I’ve visited in Europe that reminded me of a city in the U.S. (other than everything being written in German, of course).

Andy had a flight the following day so Teresa and I spent the day in the city of Leipzig. We picked up some lunch items at the grocery store and then went to a large park in the city for a picnic. I just love the lovely, green parks that can be found in the middle of many European cities! And U.S. cities for that matter. 😉

This squirrel…I had never seen anything like it before or since. Those ears!!

That evening we headed back into the city for dinner and settled on an Italian restaurant, Andria Ristorante Pizzeria. Italian food in Germany? Sure, why not. We both ordered pizzas and they were delicious!

After dinner, we just wandered around the city. Leipzig is actually a pretty nice place to stroll once you’re in the heart of it. We really enjoyed walking around and seeing the contrasts between the old, traditional German buildings and the newer, modern ones.

Everything was pretty much shut down at 8pm so we headed back to our hotel for the evening.

The next day was pretty gloomy and we really didn’t have anything on the agenda, so the three of us got in the car and just started driving. Andy started perusing a map of Germany and found a city that didn’t look too far away so off we went!

We arrived in Magdeburg in the afternoon, having no idea what there was to see or do, so we just spent the next few hours walking around the city. We discovered an older, historic part of town and really enjoyed walking through that area. We missed the opening hours of the large cathedral by just minutes and I was so disappointed.

We initiated Andy into the statue mimicking club…

As it was starting to get chilly and overcast again, we decided to head back to our hotel in Dessau (Andy had to switch hotels mid-trip). We enjoyed our last evening with Andy in Germany by walking around Dessau and sniffing out the only open ice cream parlor. 🙂

I so enjoyed spending time with my brother in Germany – it’s a memory I will always cherish – and I can’t wait for our next international adventure together! 🙂