Spending the 4th of July in a foreign country = no fireworks. 😦 But I really didn’t miss them all that much while I was in France during my 2007 summer in Europe.

After spending a couple of days around Albertville, and getting to know our wonderful hosts, we decided to venture out and take a little day trip on this American holiday. Vance and Patty’s daughter, Mary Ann, was leaving to attend a summer camp near Grenoble, so we all hopped in the car to transport her there.

The city of Grenoble is located north of Albertville, at the foot of the French Alps. It is known in France as the “Capital of the Alps” and it’s history goes back over 2,000 years. 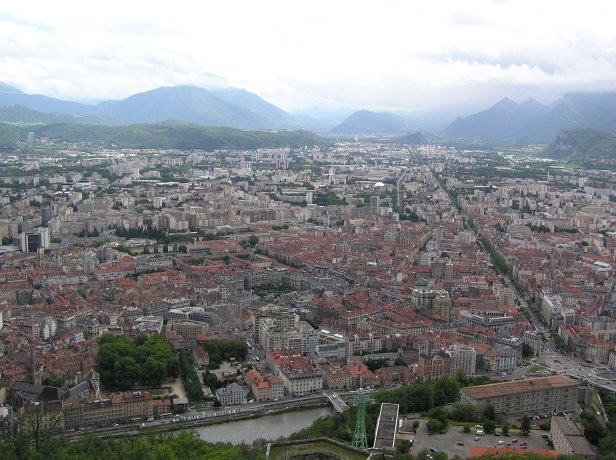 We arrived mid-morning and spent some time walking around, checking out some shops, and eating some kebabs for lunch. Now, I think I should explain what these are lest you think these are “American” kebabs, or shish kebabs. The kind you buy at the numerous kebab places throughout France are of Turkish origin and are similar to shawarmas or Greek gyros: shaved lamb, lettuce, onions, and tomatoes, served in pita bread. Let’s just say, yum! 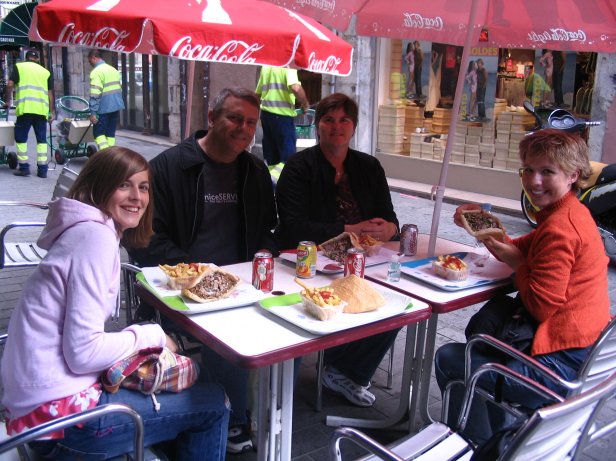 Anyway, after enjoying our first kebab, Teresa and I stayed in the city while Vance and Patty drove Mary Ann to the camp. We took the “bubble” cable car up to the Grenoble Bastille that overlooks the city. These “bubble” cars were very interesting and probably a claustrophobic person’s worst nightmare. 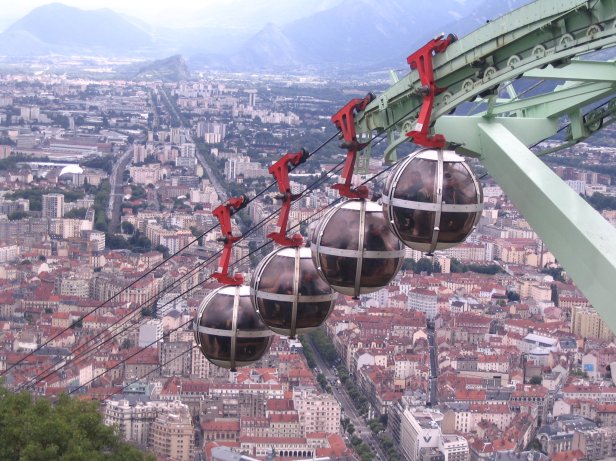 Only six seated people fit in each car

Once at the top, we discovered our first of many unisex restrooms during our European trip. Toilet stalls and urinals all together like one big, happy family. I think I would have been scarred for life had I encountered a man actually using one of the urinals…

We walked around the fortress for a while, exploring some caves and tunnels, then made the trip back down to the city where we met up again with Vance and Patty. 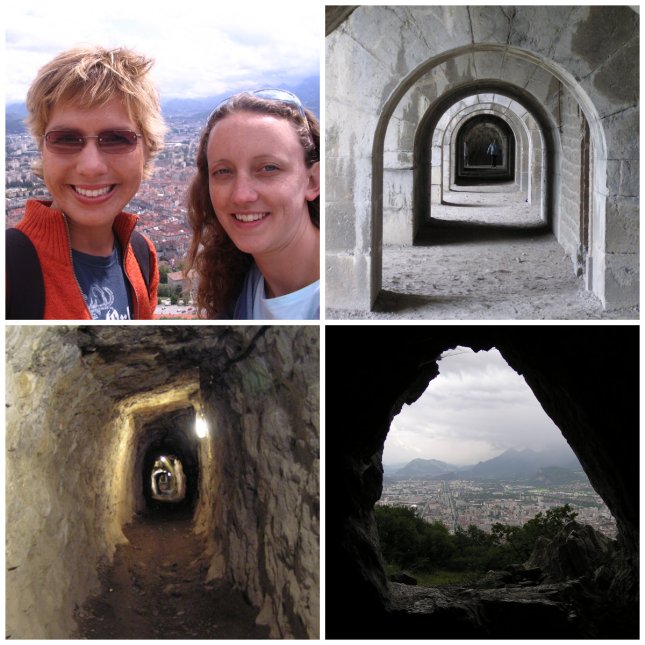 Next stop was…IKEA!!! This was actually the first IKEA I had ever been to and I think we set some kind of record for walking through the entire store in less than thirty minutes. We left with cookies and candy and continued on to our next destination: Lyon.

Lyon is the second largest city in France (any guesses on which is the largest? ;-)) and seemed like a really fun city. We parked the car and walked along the streets of this beautiful city that has managed to retain it’s charm over the centuries. 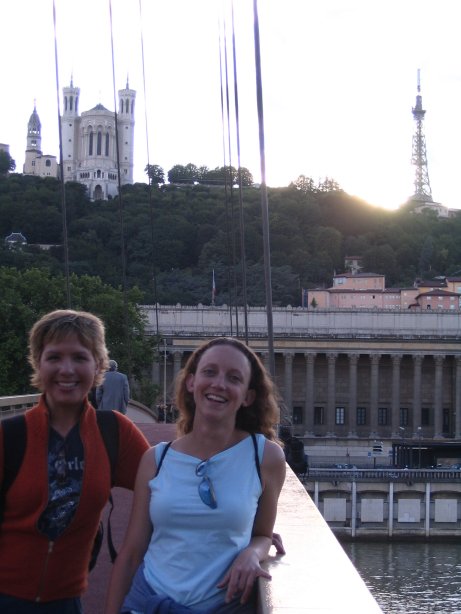 Lyon’s very own “Eiffel Tower” on the right

We started looking for a place to eat dinner around 9:00 and it was not an easy task! All of the restaurants were packed at this hour. We finally found a place called Le Palais Saint Jean and settled in for a two and a half hour meal. I love these leisurely dinners full of good food and even better conversation!

We arrived back home at 2:30am and fell heavily into bed. A long but extremely enjoyable day!

The following day we most deservedly slept in. 🙂 We had a leisurely morning, then decided to venture out again, this time heading to the mountains, and this time taking Goliath with us. 🙂 We drove first to Beaufort and visited the Coopérative Laitière du Beaufortain where we took a tour of the cheese-making facilities. It was very enjoyable although the smell could knock you over in some parts, specifically the “caves” where the cheese is aged. Whew!

This cheese is some of the tastiest I have ever had! After watching a film on how the cheese is made – from the cow to the table – I felt like I could actually taste all of the different flavors that make this cheese unique to this part of France. Even Teresa, the non-cheese eater, liked this cheese. Too bad it can’t be found in the U.S. 😦 So if you’re in France and come across Beaufort cheese, buy some for yourself, and sneak some out of the country for me. Just kidding. (Not kidding)

We left Beaufort and drove along the winding mountain roads past such beautiful landscapes full of snow-capped mountains. We stopped at one point to visit a WWII memorial and to use the restroom facilities there, and this is where I experienced my first self-cleaning public toilet. I had many restroom “firsts” while in France. 🙂 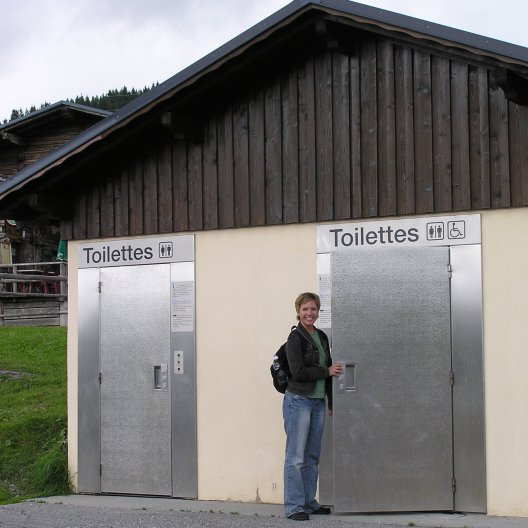 So apparently, with these toilets, once you flush and leave the stall, the door locks and the entire thing gets sprayed down. Once the cleansing is done, the door unlocks for the next person. I was just a bit terrified that the toilet stall would get confused and start the cleaning process while I was inside. But it didn’t, and I survived my first “spray toilet.” 🙂

From here we drove through the mountains some more until we came to the town of Saint-Gervais-les-Bains. This is a lovely, quaint town surrounded by the French Alps including Mont Blanc. We walked around imagining what it must look like in winter, everything covered by a snowy blanket.

We made a stop at a cafe for hot chocolate and pastries and just enjoyed the views around us. After exploring the town a bit more, and taking advantage of some photo ops with Mont Blanc in the background, we left to make the long trek home. Another fun- and laughter-filled day in France! 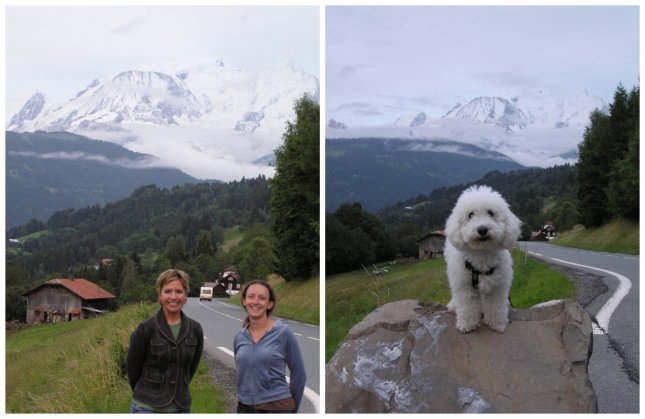